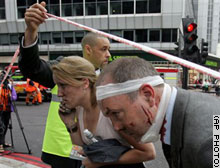 After the celebration of being a host for Olympic 2012 in London, while people are happily heading to work during the morning rush hour, a wave of terrorist bombings rocked London’s transportation system.

and… it’s business side… europe stocks reel because of the barbaric blasts, stocks are selling fast as people do not know what will happen next, but I believe the economic will hit badly and affect KLSE tomorrow morning. Oil prices was tumbled as low as USD57.20 and now……. Rebounds above USD62, and even more and even worst after tomorrow…

Walau… Prices of goods will be increase soon I guess, it’s really bad.. and I read insurance companies also hit hard as down about 4-5percent… which mean my friend’s unit trust bo liao…???

But it’s strange, after announce as the host, and the bombing happened day after that? Co-incident?

not really a coincident but a part of a bigger agenda.

the terrorists manage to cause multiple blasts and that is not so simple as we think.

the world is gettig worst!!!

The bombing was plan to coincide with the G8 meetings as British PM says,.. i think