How to advertise your products/services without paying any single cent? There is always a cost to advertise on website banner, billboard, ads on paper or internet.

This morning i just found out a smart fellow, doing advertising on the road without paying any money. His advertisement really sell during traffic jam.. Don’t believe? Look at the picture 🙂 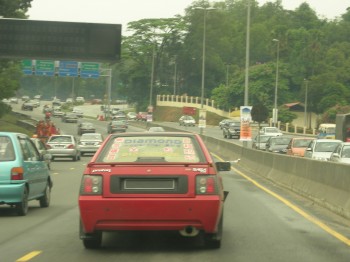